The Top Industries Spending The Most On AdWords And Why 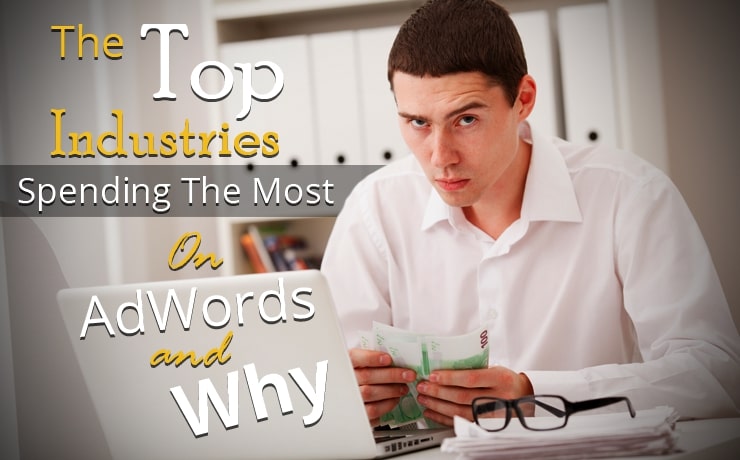 We’ve looked at how several individual companies are spending their money on AdWords and we’ve covered what we should learn from each of these examples. By looking at the advertising strategies of successful companies, we can potentially learn from them and start applying the same techniques to our own promotion. While there is much we can learn from individual businesses, there’s tons more we can learn from looking at larger trends. For instance: which industries spend the most on AdWords?

The Top AdWords Spenders By Industry

According to AdventurePPC, the top spending industries when it comes to AdWords in 2014 are:

According to WordStream, these numbers were nearly the same in 2011. If both sources are accurate, then spending for each industry has hardly changed over the last few years. Either way, it’s likely that these numbers are essentially accurate and wouldn’t have changed by a great deal.

What This Tells Us

So why might finance and insurance be the top spender on this list? One simple explanation is that there is the most money to be made in finance. Investment attracts people and organizations with large amounts to spend, while the fact that you are spending to earn means that products in this category potentially have the best ROI. Similarly, AdSense adverts are particularly expensive for advertisers and pay particularly well for publishers.

The top three highest paying keywords in AdSense are ‘Insurance’, ‘Loans’ and ‘Mortgage’, all in personal finance.

Retail comes in at number two. Why is this? Especially when the second biggest AdSense niche in terms of Cost Per Click is fitness and weight loss?

Well, we’ve already seen that Amazon is the single biggest spender on AdWords. And the reason for this is that they’re able to make such direct conversions. If someone searches for a particular product on Google, then they are interested in buying that product at that moment. As they’re likely familiar with Amazon as a brand, they’re all but guaranteed to click that ad and then make a purchase.

So finance and retail are the top spenders for different reasons. Finance is up there because there is simply so much money in that industry, while retail is up there because it lends itself particularly well to cost-per-click advertising, especially through AdWords.

Travel and tourism, which is number three, comes in somewhere in the middle. Not only are sites like Expedia able to make a lot of conversions through their ads but travel and tourism is also a highly profitable industry to operate in. Travel and tourism also lends itself well to AdWords, thanks to the ‘Google remarketing‘ feature.

The question then, is whether your particular business lends itself as well to the AdWords model. And just how much ROI can you expect from placing ads on Google? Then the next step is to look at which keywords those industries are targeting!

Getting The Most Out Of Google’s Expanded Text Ads

How To Create A Basic AdWords Campaign