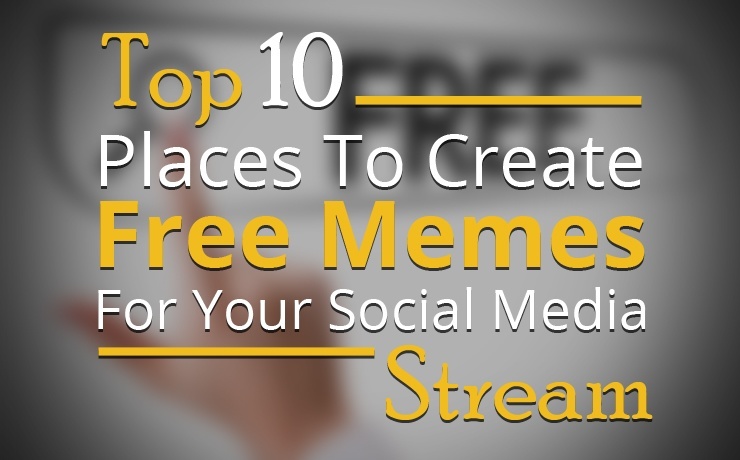 Never underestimate the value of a good meme! While you might not take all these cat pictures seriously (understandably so, perhaps), it’s important to recognize that they are actually incredibly powerful influencers and ideal for spreading a message.

Memes are perfect for this, because they’re eye-catching, they convey a message very quickly without you having to navigate away from the social media site and they often have a humorous bent. In short, they are the ultimate bait for getting likes and shares.

Oh and they also provide a very easy way to add fun images to the content on your site… so how do you build them?

MemeGenerator.Net is one of the best tools out there for creating your own memes. It also allows you to browse memes created by others so that you can get an idea for what works and what’s hot.

QuickMeme is a tool that’s very similar to MemeGenerator, allowing you to browse through memes and create your own from any combination of images and text. You can also generate ‘random’

The Rage Comic Builder is a tool specifically for building ‘Rage Comics’. These are memes that use over exaggerated and strangely detailed outlines of characters to perfectly sum up a range of emotions. They’re a common sight all over the net and very popular at the moment.

I Can Haz Cheezburger Building

I Can Haz Cheezburger memes combine cute animals with humorous captions – a winning formula that taps into Social Media’s innate love of all things furry.

Imgur is loved by Redditors all around the web. ‘Memegen’ is its in-built tool for creating memes. It’s simple, easy and its connection with Reddit gives it a big advantage when it comes to getting seen.

Zipmeme is another tool very similar to QuickMeme and MemeGenerator.

Head over to LiveMeme’s homepage and you’re greeted by a huge selection of the most popular recurring viral characters on the web, from Fry from Futurama to Jean-Luc Picard and Batman. From there you just add your caption and you’re good to go!

MemeDad is another meme creator built especially to work with Reddit, after the site banned QuickMeme. It’s free from ads and watermarks and has a great interface.

Meme Center is a particularly feature-rich meme generating tool that has the additional ability to create GiFs. A considerable advantage when we consider the eye-catching nature of GiFs.

Really, you don’t need to use any online tool to create free memes and in fact you don’t even need high-end image editing software. The MSPaint that came with your Windows PC is more than capable of generating memes and all you need to do is load an image or draw your own then place a text box on top. Simple!

How To Create A Great Facebook Page For Your Business

Elite Fitness Brands That Are Winning In Social Media