Why You Shouldn’t Build A Site In Flash 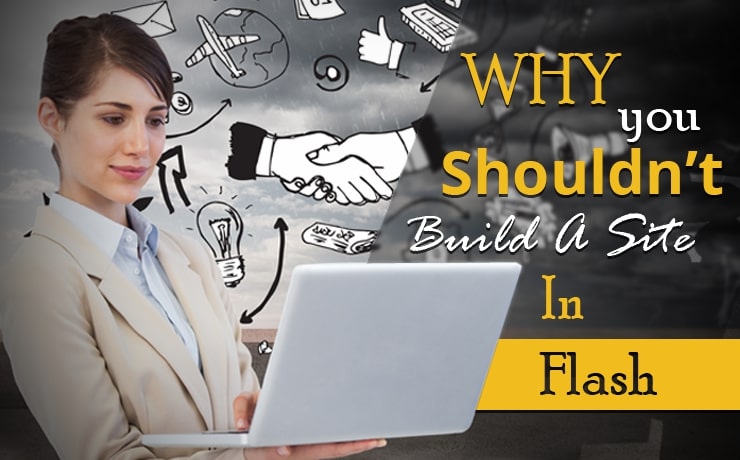 Flash is a great platform from Adobe that has been instrumental in shaping the web over the last decade or so. Its strengths lie in creating vector graphics, animations, introductions, games and highly interactive UIs, which makes it an appealing option for web designers on the face of it. Want your site to open with a splash page featuring a 3D animation of your logo? Or fancy a navigation bar that works like a mini computer game? That’s all possible with Flash.

Unfortunately though, Flash also has many limitations that actually make it a very bad choice for any site on the modern web. Let’s look at some of the top reasons that you shouldn’t use Flash in your own design, especially for a business site.

Flash Isn’t Supported by All Devices

If you design elements of your site in Flash, then they won’t be accessible on every device. In particular, Flash is inaccessible to most Android devices and all iOS devices. That means that mobile users won’t be able to access your pages if they’re in Flash and that will lose you a lot of potential traffic.

If you’re wondering why mobile devices don’t support Flash, then you may find this piece written by Steve Jobs in 2010 interesting.

You could solve the issue of restricting mobile access of course by creating two versions of your site and displaying Flash content only to users who are using desktops or laptops.

What this wouldn’t solve though, is the issue of Flash not working particularly well (or at all) with SEO. That’s because Google can’t index Flash like the rest of your content, meaning that nothing in any of your Flash is going to show up in searches.

Think of Flash as being a video being embedded in your site. Like other videos, Google can’t ‘watch’ Flash and doesn’t know what it’s about as a result.

Flash Sites Have Only One URL

It’s also worth bearing in mind that anything that happens ‘within’ Flash will only have one URL. That means you can’t build inbound links and users can’t even share articles they’re interested in. This also means that users can’t use the back button as they normally would, or bookmark a page they like.

Future-proofing your website means creating it in such a way as to ensure it will still work on most devices three years for now. In other words, it means anticipating future technology such that the next new device can still use your site and you don’t have to completely redesign it.

Seeing as many modern devices already don’t support Flash, it’s not a particularly good gambit as far as future-proofing your site goes. This is especially true as HTML5 becomes more popular…

Here are some more tips on future-proofing.

Flash can slow down your page speed

When you visit a Flash website, it will have to load which can take anywhere from a couple of milliseconds to a minute. Seeing as how much page speed matters to your visitors and to Google, this is somewhat shooting yourself in the foot.

Flash sites also have a bad habit of using loud and gratuitous design choices – overlong splash pages, annoying music and overly complex menus which only serve to confuse and frustrate visitors. Of course, you can build a website without this bombast but the two will often come hand in hand.

And if you’re not going to add all those bells and whistles, then you don’t really need Flash, do you?

See How Others Are Using Gamification In Web Design

14 WordPress Plugins That Every Blog Should be Using in 2014