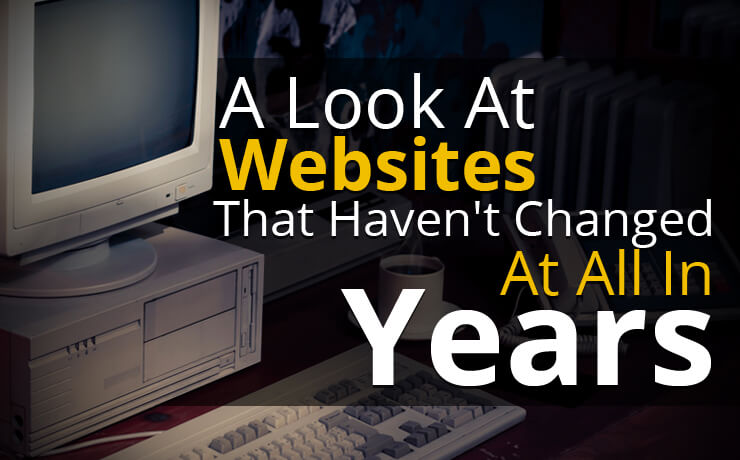 Want to take a stroll down memory lane and experience the internet as it was in the early 2000s or late 1990s? One option is to use the WayBack Machine in order to see archived versions of old websites. Another option, is to head over to the Geocities-izer where you can see any website re-imagined as a retro version of itself – complete with random animated GIFs, unnecessary midi music and awful clashing color palettes and patterns. Oh and tons of Comic Sans. It’s quite hilarious, if a little distressing.

Actually though, in order to get this window into the past, you needn’t use any of these tools at all. As it so happens, there are entire corners of the web that have gone entirely untouched by things like ‘progress’ or ‘fashion’ and these provide us with perfect little time capsules.

Space Jam is often heralded as one of the most pleasantly kitsch and retro websites on the net, having not changed at all since 1996 – that’s 18 years. And just like those Geocities sites, it features a constantly repeating background, Times New Roman font and even ‘frames’ if you recall what those are (SEO-unfriendly windows displaying entirely different pages on a site). The red typeface on a black and white background must have been a dubious design decision even then…

You can even phone up and order a copy of the soundtrack on cassette tape!

Another site from Warner Bros, this time featuring their 1998 film ‘You’ve Got Mail’ starring Meg Ryan and Tom Hanks. When you load up the site, you’re greeted with a logo that (deliberately?) appears to have been drain in MSPaint and a message asking if you want to proceed with the Flash introduction or skip it entirely. It seems even back then, Flash was already causing compatibility issues. This is also another design no-no in terms of SEO with splash pages providing no helpful information to Google.

The main site itself is a large full-screen menu with a few options (you can get $5 cashback if you order the film on VHS by post). The images are super-low res and poorly photoshopped (nice square hair Tom!) but at least there’s mouseovers!

This is a strange one seeing as the band is actually pretty popular still. Nevertheless, NSYNC.com has not received an update since 2010 and it looks like it’s much older. The site features more default-looking fonts, ugly dark blue on a dark grey background and actually zero links to pages where you can get any information. We know the site has at least been seen as recently as 2012 (as that’s when the copyright notice was updated) and CDs probably could legitimately be sold from here… It’s a genuine mystery!

Next time you’re feeling down about your website, just take a look at any of these and you should start feeling a little better. We sure have come a long way! And these were (presumably) created by professional designers with big budgets.

There are many more examples of websites that time has eluded them, from the Jurassic Park ‘Lost World’ site to the site for Crash Bandicoot 3. What are your favorites?

14 WordPress Plugins That Every Blog Should be Using in 2014

How To Achieve Effective Image Optimization For Your Website