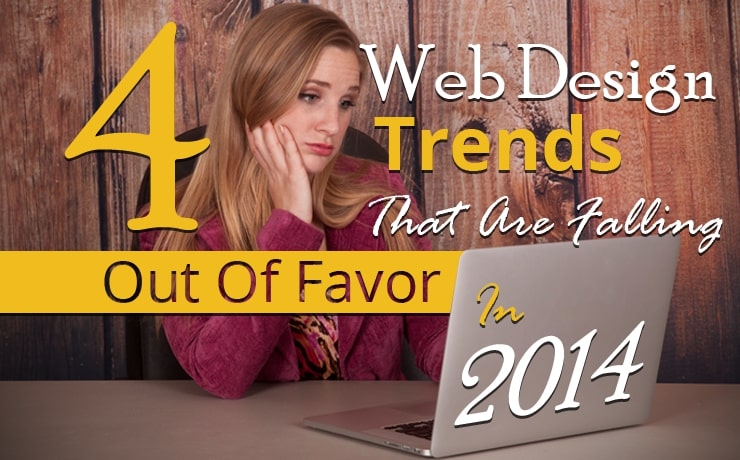 Web design, like any kind of design, is based on current fashions and trends. When a popular new design element is introduced either through technology or through a successful website or app, we’ll regularly see sites jump onboard and ‘borrow’ some of those ideas. In time, this then leads to those ideas becoming commonplace and almost expected as part of the universal design language of the web, and what you have on your hands is a ‘trend’.

Adopting these trends is a great way to make your site seem modern and up-to-date, but it also runs the risk of outdating your site if you aren’t equipped to remove those elements when they fall back out of favor. Just as you can often predict how old someone is from their choice of clothing, you can also “date” a certain web design by its use of certain fonts, colors or visual flairs. This isn’t something you want, seeing as most sites should look as though they’re right on the cutting edge and should never look outdated.

If you are currently following any trends that are on their way out, then you need to act fast to remove them before you inadvertently make your site seem outdated. Read on and we’ll look at four such trends that were once all the rage but are quickly going the way of the dodo…

QR codes were supposed to be the future at one point, but they never quite took off in the West the way they were expected to. It’s probably because it’s still generally easier to just type in a web address. And when you’re online, they’re almost entirely pointless seeing as a link would be much quicker to just click.

Use them if you must, but consider making them a little less prominent. Just ask yourself: when was the last time you scanned a QR code? That’s what I thought and that’s why they’re on the way out…

Any typeface designed to look as though it has been hand written is a ‘script’ typeface. These are great for making things look natural, elegant and personal and have thus been widely used around the net for the past few years.

Gradually though, they’re starting to become less popular partly because they’ve been over used (to the point where they’re almost clichéd) and partly because they become hard to read as they get smaller on mobile devices. Here are some other fonts to stop using if you want to keep up with the times.

Skeuomorphisms are design elements that are based on real world elements – the simplest example being a clickable element designed to look like a button and one of the famous example is the Apple newsstand bookshelf. They could be useful for making a site more intuitive to navigate, but using them as a key component of your design is something that’s less popular now as ‘flat design’ is starting to take over – at least partly led by Apple’s move away from this design trope with iOS 7.

There is a time and a place to use skeuomorphs, the trick is knowing when and where that is.

Nowadays, mobile only sites are replaced by adaptive design. This is at least partly due to the sheer range of different screen sizes people can view your content on, but it’s also down to practical reasons and reasons in the interest of consistency. Sure mobile only sites are leaner but ultimately, why have two entirely different sites when you can have just one that does everything?

Top Magento Extensions From Amasty That We Love

Is Your Website Missing These Modern Web Design Elements?